The intrepid Mr Wilson and I have been to a couple of beer festivals recently.

The first, to coincide with St Patricks Day, was The Porterhouse's Stout Festival. There are three key points to be made here:
1) St Patricks Day. This means anywhere with any sort of Irish connection (landlord's brother once went to Dublin, etc) - let alone somewhere actually half-decent like The Toucan in Soho - will paint itself shamrock green for the day and become unpleasantly full of City lads who are even less Irish than the pub landlord's brother. Hence Al and I chose to have our own small celebration one day early.
2) The Porterhouse: Moderately Irish, usually completely packed with City lads, but sometimes still worth it as it has nice beers which it brews itself. Great glossy beer menu, that's beautifully colour printed, yet doesn't appear to have ever been proof-read to avoid mistakes like "This was Michael Collin's favourite tipple". Ouch.
3) As we now realise, the "Stout Festival" consisted of four stouts. Fine, I guess, in itself, but three of these are always available. So the "Festival" was one extra stout. Woohoo! Anyway, it was a very nice Chocolate Truffle stout, and for the first time, I could actually taste the chocolate in the stout. The regular 4.8% Oyster Stout - apparently brewed with fresh Oysters, and therefore not suitable for vegetarians - was also top notch.

The second, last Thursday, was the London Drinker Beer and Cider Festival 2006, at the Camden Centre opposite St Pancras station. Because these sort of events take place in civic halls, it always reminds me of my prep school prizegiving at Wallington Town Hall, which makes it all rather surreal. Anyway, the event presented Al and I with a bit of a quandary. It's a good thing that the excellent work done by Camra means that real ale is popular. But it's a bad thing that this means these events are now bloody packed! 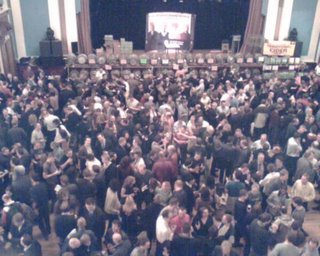 And the large number of people milling around meant it was difficult to get back from the bars without spilling your point, and the queue for food was long (though the O'Hagan's sausages from Chichester were well worth the wait). 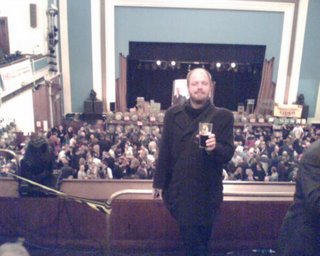 After three pints - all very good: Grand Union Gold, from Hayes in West London; Pucks Folly from Maldon, Essex; and Crouch Vale Brewer's Gold, the Champion Beer of Britain 2005) - we retired to the nearby Shepherd Neame pub, called Mabel's Tavern. I suspect the name is more about being in Mabeldon Place, rather than the Mabel, the alleged former-landlady who now haunts the place, as they'll have you believe!


While in Mabel's Tavern, we looked in more detail at my purchase of the latest Camra publication: London Pub Walks. What neither of us had expected (though I guess we should have known better!) was the emphasis that Camra has placed on "PUB" over "WALK". You'll never lose that beer belly with these:
Fleet Street: 5 pubs, 3/8 mile
The Heart of The City: 7 pubs, 1/2 mile
Wandsworth Town: 7 pubs, 1.25 miles - phew! 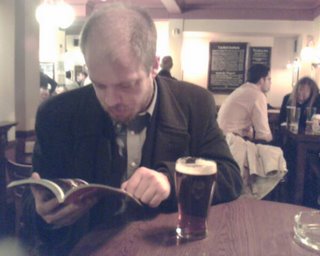 Al needs a pint just to read about doing a pub walk, yesterday

We did consider moving on to the Head of Steam at Euston station, although this has now been sold to Fullers and is being refurbished and renamed as the Doric Arch, although they *claim* the beer selection will remain. We'll have to investigate another time...
Posted by Will at 2:05 pm 1 comment:

Made it to a couple of nice pubs last weekend whilst on a grand tour of the North, which included a trip to see Lord and Lady Pie.

Friday night was spent in Carlisle, and as we were staying in the Premier Travel Tavern, sorry Inn, we eat and drank in the neighbouring Lakeland Gate Brewers Fayre. Even allowing for the fact that apparently this place was under several feet of water last year, if we hadn't had such fine company, this would have been pretty miserable. The bar staff seemed more interested in chatting to their mates, who made up most of the clientele in the place on a Friday night. They scored Brownie Points for taking a drinks at the table, then lost them all in the space of walking back from the table to the bar, by forgetting to, er, get the drinks. D'oh.

We used the opportunity to explore the Lake District, and on our way to sample the Cartmel Sticky Toffee Pudding, we stopped off at the Kings Arms in Cartmel. The Good Pub Guide recommends this, and whilst we only stopped off for a swift half of Hawkshead Bitter from the Lakes, this seemed like a nice village pub doing good food. 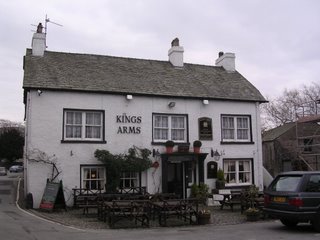 That night, we stayed in another GPG-recommended pub, The Sandford Arms, in Sandford, a small village just off the A66. Other than some unexplained hammering from above our bed in the middle of the night (Derek Acorah? We were on the top floor...), it was very nice - a couple of real ales on tap, plus some nice food and comfy bedrooms. 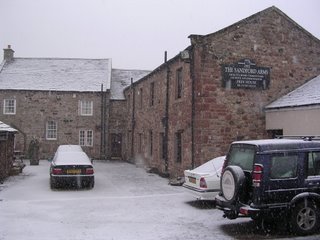 The only disappointment was that the forecast snow came just too late for us to be snowed in the pub - this has long been my life's ambition. Here however is what the A66 was like on the way to Hartlepool - up on the Moors between Brough and Barnard Castle: 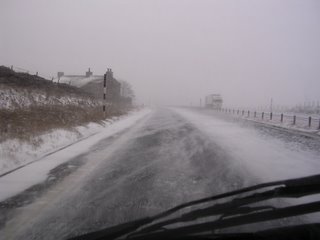 It's becoming increasingly difficult to find new pubs, especially new old pubs, in Central London to try for the first time. But Neil Gardner and I managed last week - and it's a great find!

Just next to Cannon Street station is The Bell. It's not a new pub by any means, having allegedly been one of the few pubs to survive the Great Fire Of London. And it's also supposed to be where the phrase "needle in a haystack" orginated, as Bush Street was apparantly the home of London's needle-making industry. No, I'm not making this up.

Anyway, it has a really nice country pub feel, with a proper old fashioned bar - and was reasonably quiet, although it was a Monday night. Beer isn't cheap at £2.90 for a pint of real ale - if I recall correctly a guest beer and a couple of yer standard offerings - but then this is the Square Mile. The beer was good quality too - I believe this is the sister pub of The Wheatsheaf in Borough Market, so comes with good credentials.

Neil and I sat on bar-stools and put the world to rights. The regulars and landlord seemed friendly too, although a couple of back-packers stuck their heads round the door and disappeared again pretty sharpish - they were probably looking for a
"Walkabout Bar". A great find - and definitely one that will be added to the regular circuit!

Now I've been dragged into 2004 and got a camera on my mobile phone, expect more surreptitious taking of low-res pictures in pubs, like this one: 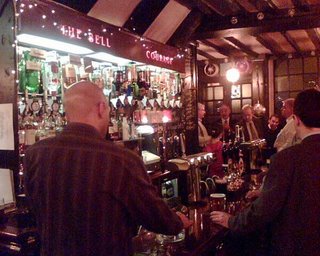 The Bell, Bush Lane, London's needle-making quarter, yesterday
Posted by Will at 8:11 pm No comments: