A first look at Chelmsford

As some of you may already be aware, the Pub Guide has relocated to the jewel in the crown of The World Famous County of Essex (copyright: Essex FM), Chelmsford.

Top showbiz journalist, Nick Wallis, was in town for the V Festival, so we decided to explore the pubs of Old Chelmsford, south of The Parkway. A stroll through Central Park landed us at the Queens Head.

This is a former Chelmsford Pub of the Year, on Lower Anchor Street and close to the Cricket Ground, owned by Crouch Vale Brewery, so my hopes were high. And I wasn't disappointed - it's a drinkers pub, with several real ales including Beer of the Year: Brewers Gold (and I mistakenly ordered Brewers Gold EXTRA, at 5.2%!). It shouldn't really work, as it has what could be a nasty modern extension on the back, but somehow it all comes together in a fine local. I liked it - and brought TCMJ back here (as a special birthday treat!) a couple of days later. 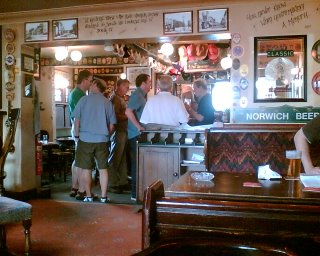 Walking along Lower Anchor Street, Nick and I chose not to try the Orange Tree, and headed instead for the CAMRA recommended Cricketers on Moulsham Street. Now, it's an OK pub with some nice beers. But at 10pm on a Friday night, the only women in there were the bar staff. I also thought two pints of beer were £5.50, when it was actually only £4.50, and thereby marked myself to the locals as a London Arse - I only just managed to stop myself saying "Really? That's cheap!" which probably would have got me a (deserved) kicking. We drunk up and moved on again to try to find somewhere more lively.

Perhaps it was the V Festival, or summer holidays, or both, but town was comparatively quiet too. Even Dukes Nightclub was lacking the usual crowd outside. However as we walked back past what's probably my closest pub, The Ship on Broomfield Road, we noticed there were still bouncers outside, and after some teasing about having asked whether they were open, we were inside a good, lively local pub, still going strong after 11pm. We were particularly impressed that the landlord wouldn't let us have the pints of St Austell Tribute that he'd poured, as he didn't think they were up to standard. So my new local had saved the day. With all this and the Only Fine Beer shop opposite, what more could anyone ask from a new home?

The Current Mrs Jackson and I recently spent a week in Northumbria. Not only is this rightly labelled as an Area of Outstanding Natural Beauty, but the beer is cheap and there are some fine ales to be had. 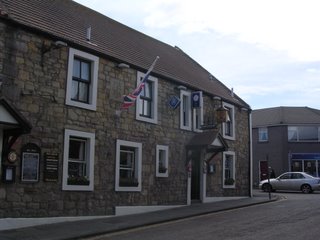 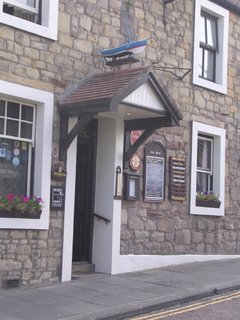 First up, the excellent Ship at Seahouses. Not only is there a top fish'n'chip shop nearby, but this hotel bar next to the harbour carries off the nautical theme really well with all sorts of ship-related paraphenalia: 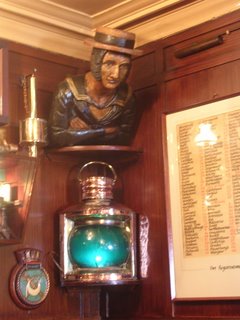 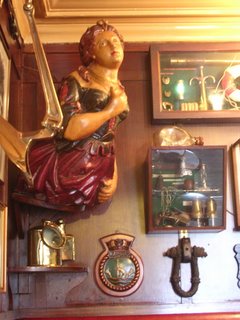 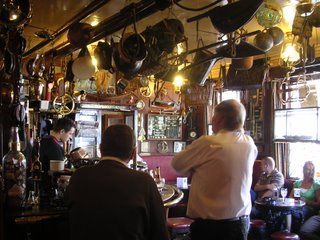 Towards the end of the week we went down to the tiny hamlet of Low Newton by the Sea. As you can see, the beautiful beaches get really crowded in August! In the corner of a square of National Trust properties is a small pub that looks like it should be full of jolly fishermen trading their catch for pints. Instead, it's actually got quite a trendy "gastro-pub" look, and a reputation for good food. Now the GPG said "booking essential", so we asked whether it would be possible to come back for a meal the next evening. They were full until next Tuesday; sadly it was Thursday, and we went home on Saturday. So us mere drinkers were relegated to the tables outside - not that this was a hardship given the fine sea views. But if we go back, this will definitely be our first stop, to try to book a table... 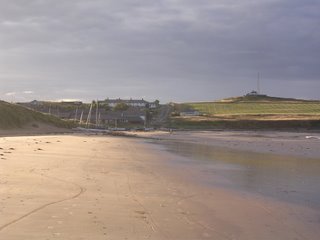 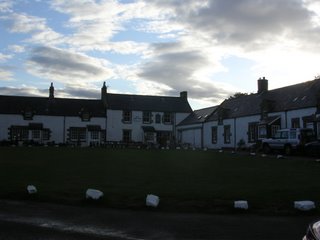 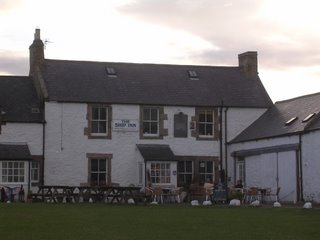 We had two locals in the village of Beadnell where we were staying. The first was the Craster Arms: I walked in and walked straight out again. I couldn't put my finger on why I didn't like it - but Helen said "this is what you imagine a pub in a holiday camp would be like"... and she was spot on. 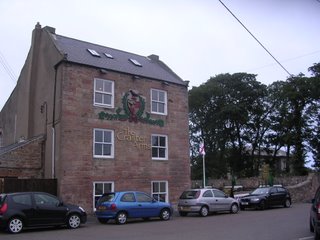 So we spent our drinking time in the New Beadnell Towers Hotel, which came recommended by the owner of the B&B. 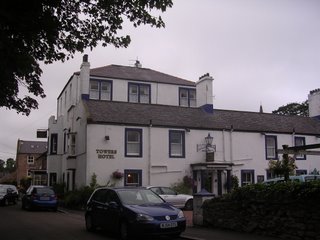 This was an odd mix of local pub and hotel - which I guess it needs to be - but to the extent that we didn't know whether we were mistakenly sitting in the dining room when drinking, or whether we were looking at the right menu when eating. And here's the problem - £9.95 for scampi and chips, when all we wanted was a bar snack. And this is the cheap North East? But a couple of pints of splendid Farne Islands beer did go some way to making it better.

But this problem was not confined to Beadnell. We stopped at the GPG recommended Tankerville Arms in Eglingham. Now don't get me wrong - the welcome that we got, the beer and the food were all excellent. I couldn't fault a thing with what we did have. But what they didn't have was any food (other than bagettes) for much less than a tenner, when all we wanted was sausage, beans and chips for a fiver. While the improvement in the standard of pub food can only be a good thing, you can't help feeling they're cashing in. The campaign to Bring Back Bar Snax starts here... 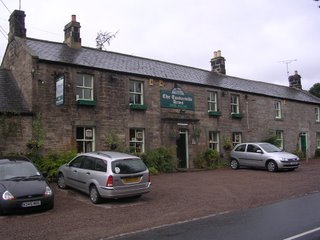 ...where are these all coming from?
And like Big Brother... Will's Dad will get back to you.

I am a keen Guinness drinker, but I am starting to worry about the etiquette regarding the shamrock drawn on the top of the pint. I would like to see it on every pint if it were a good impression of a shamrock, but generally you can’t tell what it is and it just looks untidy. I really don’t know whether to just say no to the shamrock all together or risk it and end up with a squiggle which I can only describe as bad impression of a pair of bollox. Would like to know if you have any advice because I think I am letting it stress me out!

Mark E Owen
Posted by Will at 7:08 pm No comments: 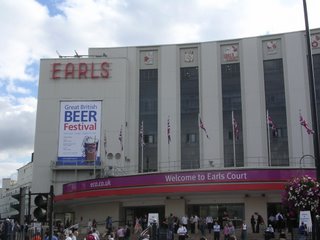 This year, bigger, and well, much the same at Earl's Court. 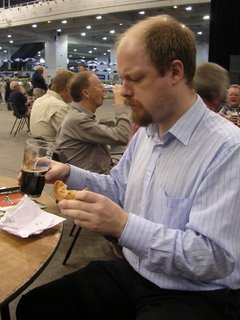 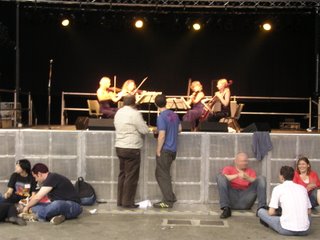 "Hello Earl's Court!" A classical quartet whip the drinkers into a frenzy... 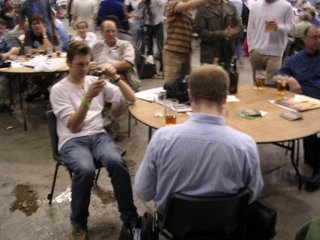 Blogistan will eat itself. Lorkin takes a picture, yesterday. 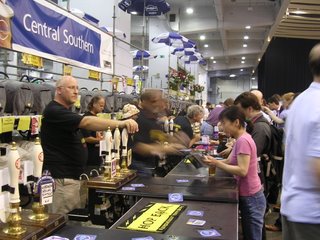 The Southern Bar, home to Alton's award-winning Fff Moondance beer.
(Congratulations also to Chelmsford's own Crouch Vale, and to Will's Dad's tipple of choice (as long as the tide's in) Harvey's Sussex Best on their Champion Beer awards) 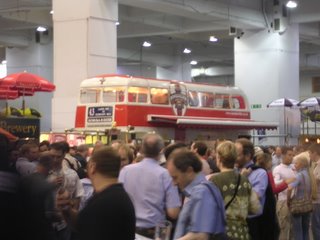 Someone nicked a bus and drove it into the hall. Wasn't me... 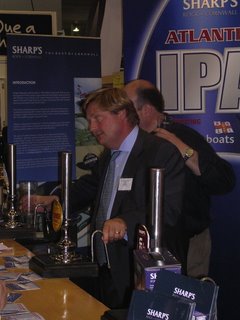 One of these barmen is not the same as the others. His name's Nick. He has to be the boss, doesn't he? 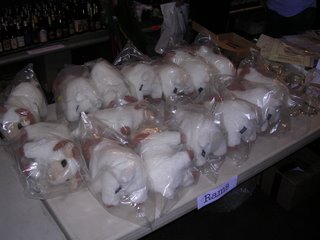 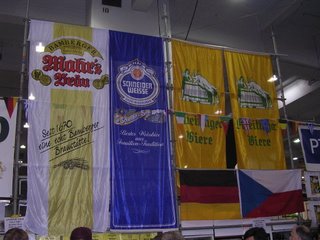 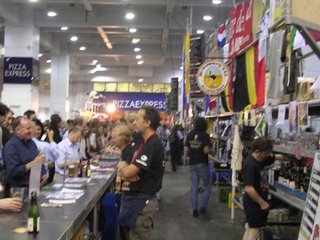 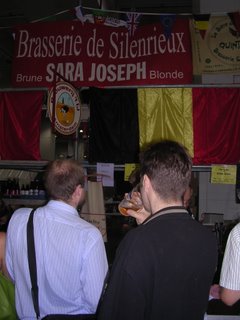 Ju and Al buy bottled beer. And try saying that after a few... 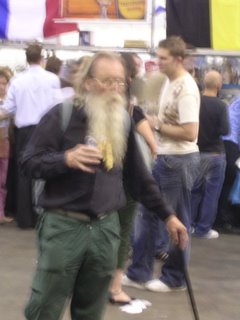 It was dark and I was trying not to look like I was taking a picture.
I think you get the idea though... makes Al look like a beardy amateur. 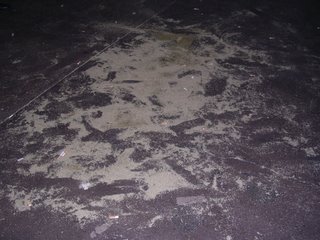 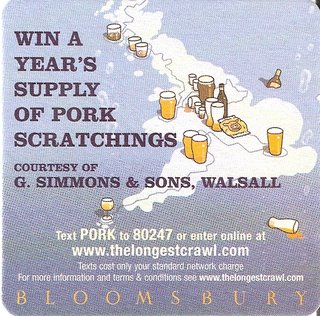 A beermat from the hall. They know what their audience want! 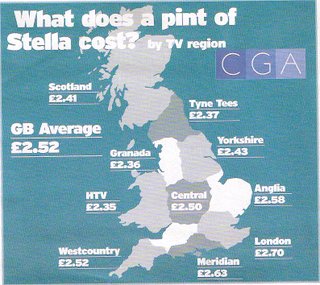 I picked up a copy of the Morning Advertiser to read on the long journey home.
It had this very useful map (even if some of the regions are a bit wrong!). I'm off to Tyne Tees for a week. Can you see why?!
Posted by Will at 8:53 pm No comments:

arrived in the inbox this morning. It's an issue that concerns us all:

I hope you can help with the correct etiquette in dealing with a "welbow" this is the word my chums and i use when approaching the bar and ordering a drink. Upon leaning on the bar in order to attract the barmaid/mans attention sloppy individuals have left unnecessary rings of drink and water on the bars surface resulting in a wet elbow. During this hot period the condesation falling from the glass is making a mess of my nice new clothes. How would you deal with this problem.

The Reverend Green, Bicton, Shropshire.
Posted by Will at 10:43 am No comments: