If it's good enough for the Pope...

Even the Pope loves beer!

The Times reports that "The papal beer is strong stuff at 5.4% proof and made by the local Weideneder brewery, which now prefers to be known simply as the “Papstbier Brewery”."

Read more here:
Catholic Bavaria gears up for Pope's homecoming
Posted by Will at 11:40 am 1 comment:

I'm not very cool, and therefore don't often get to review a trendy new bar on the same night as Time Out. But that's what happened last week. And the catch is, it's so good that I'm not even sure I should write about it for fear of it becoming really popular and not being able to get a seat next time I go, which will probably be quite soon. But I suppose in the spirit of WPG, I should, and so, that's on the way, as they say on the radio. 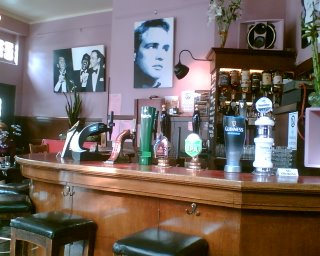 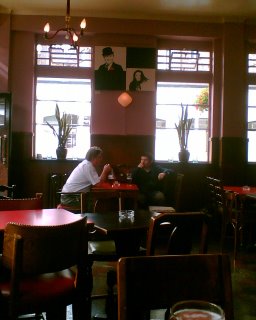 First though, a couple of other recent visits. We've written about The Duke, on Roger Street, just off Grays Inn Road a few years ago, but TCMJ and I went recently as it was close to the solicitors where we had to sign house-related documents. It's a made-over back street local, but much cooler than your normal paint job. It updates many of the original fittings, giving the place an oddly retro feel - although I couldn't decide if it was 1930s or 1950s. 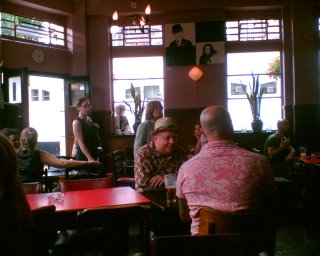 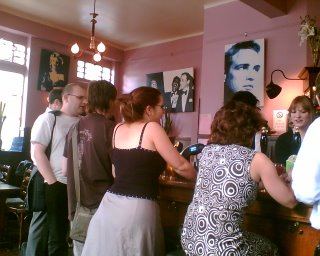 More recently, in perhaps one of my toughest "Challenge Will"s, I was tasked with finding somewhere halfway decent to drink in King's Cross. After some research, I plumped for the King Charles on Northdown Street - the turning for this is almost opposite the Thameslink station. 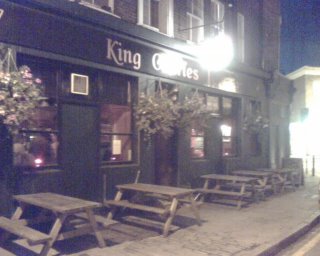 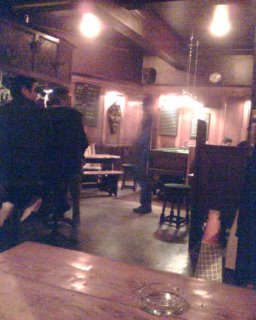 It's a good ol' boozer, with some seats outside and a bar billiards table inside. The locals might look like, well, locals - but they're a more intellectual lot than you might think, as they came over to our table not to mock the meejah types in their midst but to get to a dictionary on a shelf next to us, and later to get an encyclopedia to look up the date of the Battle of Nazeby! 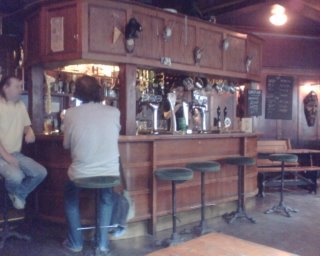 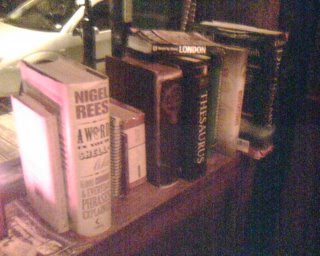 And so to the new pub. This is The Rake, on Winchester Walk, at the back of Borough Market, and close to Brewharf and The Market Porter. It's owned by the guys behind the Utobeer stall at the market - and has one of the widest range of beers I've seen, from 24 different countries, I'm told. The English draught beer wasn't yet ready (it's only been open two weeks) but they had Liefmans Kriek, Maissels Weisse and Veltins pilsner on, and I had the Anchor Steam Beer which was lovely - and somewhat, er, moreish. There is even a 11% champagne beer at £29.95!

It's not a big place though - apparently it holds 44 people, plus the beer garden, so get there early. And the only (very minor) complaint is that there isn't a gents - you have to go through the garden to access the Market toilets! But this really is a quibble for having what I'm sure will be one of London's best bottled beer pubs on the doorstep of Regulator Towers.

And head to the newsagent now, as Time Out were taking pictures on the day that the WPG team were in, so expect to see our drunken faces leering out of a five-star bar review soon...
Posted by Will at 1:14 pm No comments:

Worth mentioning that the underground press - yes, real "hard copy", old fashioned print journalism - is alive and well in Essex.
Some of you may already know of Chelmsford's own excellent fanzine The Edge. But while in the Queens Head, I picked up a copy of Essex's PUB fanzine, The Tap Room. For those of you that don't want to get inky fingers, you can read the latest edition here...
Posted by Will at 1:07 pm No comments: