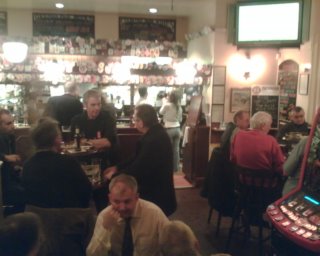 I've been lucky with my local pubs. The Priory Arms was just round the corner when I lived in Stockwell - and it's great. 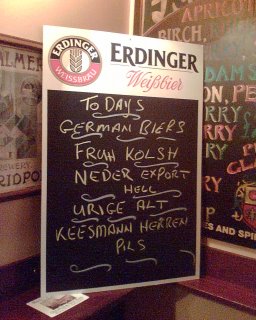 The pub has a great range of beers already - so add these barrels behind the bar, put Bratwurst on the menu, and you've got a German Beer Festival! 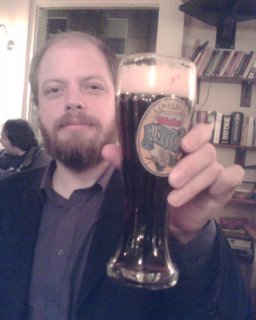 Al enjoys another beer... but what's that over his shoulder? 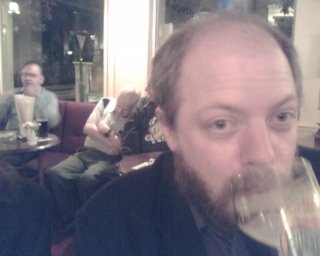 Zzzzz...
Oh dear, those German beers are strong, aren't they?!
Posted by Will at 6:39 pm No comments:

The few joys of the new commute are that (a) occasionally in the evening I can get a real InterCity type train with a nice buffet selling cans, and (b) if that fails, I can call Garders and meet him for a beer in Shenfield.

And (b) is what happened a couple of weeks ago. There are two bars and a kebab shop in Shenfield, which is essentially a row of shops, plus a mixture of bungalows for OAPs to retire to and HUGE houses for commuters who can afford to live there.
The kebab shop has recently been fined for what the local paper describes as a "cockroach shocker", so Garders had warned me to eat beforehand!

The first of the two bars is Lot 75. It's an odd one, as because there are only the two places to drink in town, they tend to have a wide clientele. I was sat between a very old lady drinking a sherry with her bar snack leftovers wrapped in silver foil to take home for her tea, and a city suit off the train necking an Asahi lager. Then the local vicar walked in, which was just wierd. This would be fine in a traditional pub in an Irish village, but felt somewhat incongrous in a trendy bar with premium lager at £3.30 a pint. (You did get free bowls of peanuts, which is always a bonus!). 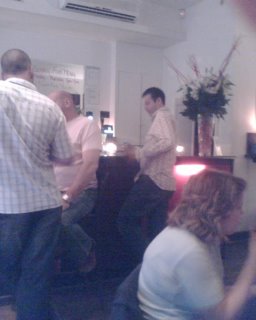 Garders buying a drink, captured on film for the first time.
Vicar not pictured. 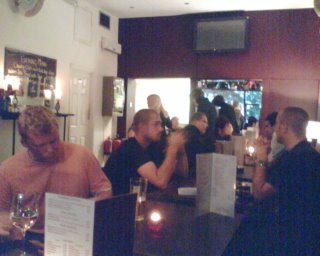 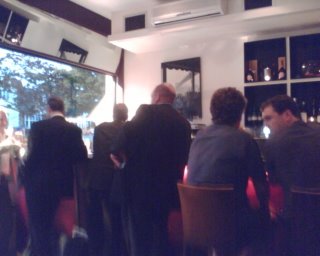 And so onto Hollands Wine Bar which is literally opposite the station. I'd been here once before - a very long time ago - and I recall this was owned by a former footballer. And true to form, the footy was on some big plasma screens, and the bar seemed to be populated by men in shiny grey suits who looked like football managers, and women who were probably once WAGs wearing more leopard-print (I know it's supposed to be trendy right now!) than was good for them. 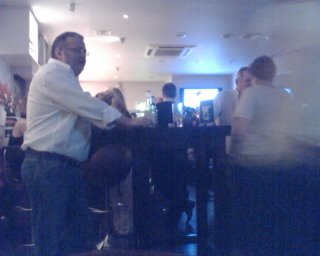 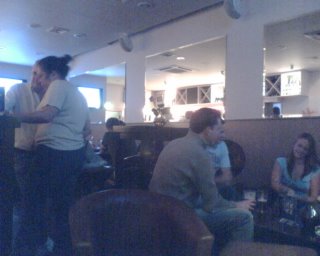 The problem with these places is they are nothing more than shops with a bar stuck half way along one side; and while they've both made an effort (Lot 75 more so than Hollands) that's what you're stuck with, and a bit of chrome and mirrors won't hide it. But after a hard day's regulation, I'm really not that fussy...

And more recently, two former Chelmer FM colleagues and I met up in Chelmsford. On the way, I discovered Chelmsford has a giant Wetherspoons, which I didn't even know existed. My theory of Wetherspoons is that they are either fantastic bank conversions (e.g. The Knights Templar in Holborn or the one in Gracechurch Street) or really dangerous vertical drinking places inhabited by mad old men there for the cheap beer (Balham, Tooting). I suspect this is the latter, but we'll see! 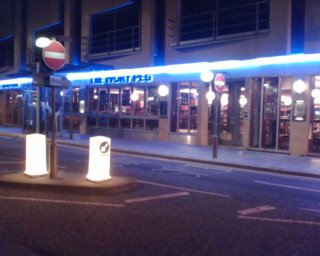 Wetherpoon's, Chelmsford.
The no-entry signs are trying to tell me something...

I passed it by and headed for Baroosh, newly opened next to Chicago's. Again chrome and mirrors, but very well done, and more importantly, non-smoking. The point to note here is the toilets, which are very classy, and have THE MOST POWERFUL HAND-DRYERS KNOWN TO MAN. First, they actually get your hands dry, which I've never experienced before. Second, it is actually a struggle to keep your hands under them... I can only liken it to standing next to the propellor of a plane. Astonishing. Sadly, this overtook the evening and I can't remember whether the beer was any good... 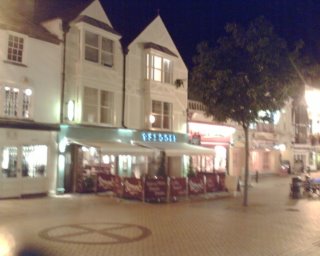 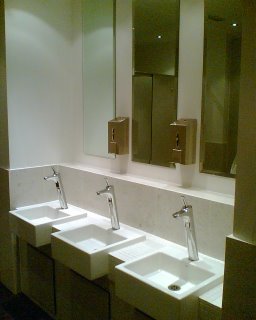 Baroosh toilets, hand-dryers not pictured as someone came in at this point - and I really didn't want to have to try to explain that I was taking pictures in gents toilets for a blog I ran...
Posted by Will at 6:03 pm No comments:

I've been in the pub a lot in the last few weeks.
I guess this means two things:
1) That's why I haven't written on here in a while... time spent on the PC isn't time in the pub! Hence,
2) I owe you some updates. So here's the first in a series of catch-ups from London and The World Famous County of Essex.

I've written about the White Horse previously; Nick and I went here on our Route March Pub Crawl of Chelmsford. It's a good back street pub that takes its beer seriously, as you'd expect from a pub owned by the award-winning Crouch Vale. So the news that they were having a beer festival drew visitors all the way from, er, London SE19 - OK, Al and Louise were up for the weekend. 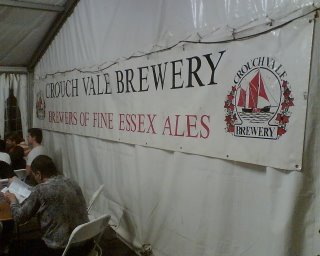 The festival was in a big marquee in the car park - and both that and pub itself were were busy; if we hadn't already barbequed, there was also a roast out on the patio. By the time we arrived at 5pm Saturday, many of the beers had gone - and it was obvious that many of the locals had been in there since lunchtime! - but there was still plenty left for us to try. 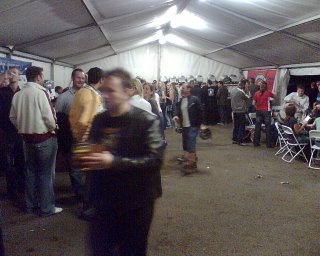 There was a good selection of bottled beers too, and we tried Burton Bridge Bramble Stout and Salopian Entire Butt English Porter: proof yet again that if a beer has a silly name, you'll try it! 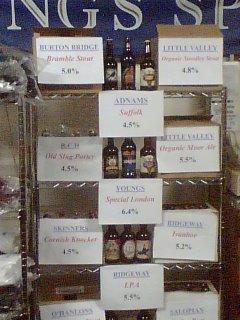 I vaguely recall having a pint of Branscombe Vale Branoc and some Sharps too, I think. I must remember to write these in the programme next time... 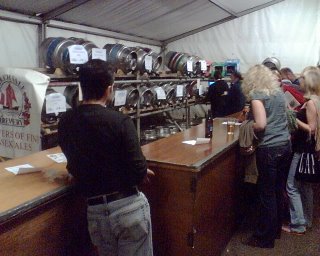 It wasn't the Great British Beer Festival - a suburban car park with a few patio sets is not the most glamorous of locations (although neither is Earls Court to be fair!) - but this sort of event is precisely why The Queens Head wins awards and also why we're very lucky to have the White Horse a short stroll away from the house. Roll on the Chelmsford Winter Beer Festival in February! 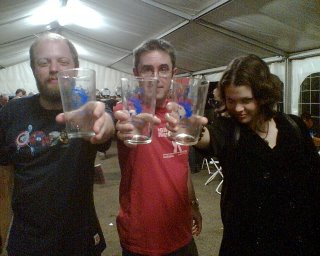