When we went on one of the last Young's Brewery tours in Wandsworth, the guide mentioned their Christmas Pudding beer. This, he told us, would be one of a handful of casualties in their move to Bedford.

So when Al and I noticed some bottles (albeit a tad past their sell-by date) in the, er, mighty fine Only Fine Beer emporium in the Glamorous West End Of Chelmsford, we snapped them up. And I've exercised considerable will-power to leave the bottles in the cupboard all the way through to the festive season. 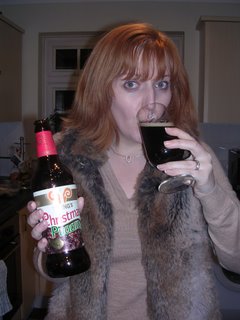 The label suggests its "warming, dark ruby character and the splendid luscious flavour of dried fruit... is an inspirational addition to any traditional Christmas feast or fireside gathering." More importantly, we were told that if you add it to the Youngs Chocolate beer (which is still available) it tastes of Bounty Bars. And on tasting, you could see why - TCMJ and I agreed that the main flavour was coconut - and I don't remember that being the key ingredient of my Xmas pud.
Anyway, here's a Christmas treat: ITV Digital Monkey (Retd.) and the last bottle in captivity of Youngs Xmas Pud Ale. 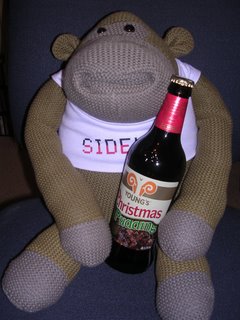 (Note: Actually, their website, suggests it may still be available...)
Posted by Will at 1:54 pm No comments:

I have previously thought lots about the merits of joining a members club. I rather see myself sitting in an elegant wood panelled lounge, sipping whiskey served by a waiter from a silver platter, while discussing the finer points of politics. Much of this fantasy was fuelled by a visit to the National Liberal Club for a wedding - it looked like this: 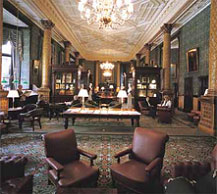 ... and therefore fitted the bill perfectly. Unfortunately, the need to be nominated by an existing member and the £490 fee somewhat dampened my enthusiasm; plus it's at Charing Cross, which while not exactly far from Regulator Towers, is in the opposite direction to my journey home. Otherwise, there are trendy West End clubs - I've been to places like Milk and Honey which are very nice for a cool night out, but not really somewhere I feel I could sit and have a pint with a mate.

So I was very excited to learn of a comparatively new and somewhat secret bar at London Bridge, which came very highly recommended by those in the know. I popped along to investigate on its last day of free entry, and was so blown away I joined on the spot. Other than being an exceptionally impressive venue in its own right (albeit in completely the opposite way from either the NLC or mlkhny), it has its own garden shed: 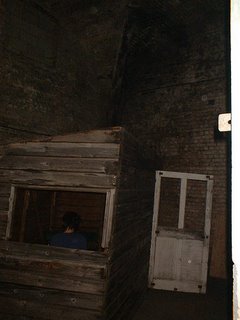 And that was the point I knew it would be worth the money, despite what Groucho Marx said about not wanting to join any club that would have someone like me for a member. So I've splashed the cash for a three-month trial, and am able to bring one friend along for free (more will cost £5). I'm not going to go into any more detail about the place in the meantime, as you are hereby invited to join me at my club any Wednesday, Thursday or Friday from 1800 til late, when you can see it for yourself!
Posted by Will at 4:46 pm 3 comments: