Since one of the reasons for moving to The Birthplace of Radio (TM) was to have much easier access to fine country pubs than London SW17 could offer, it's been a bit disappointing that we've spent so much time either working on getting the house in order, or just being plain too busy, to get out and visit a few.

So there's New Year's Resolution number one then. And it's not like we're short of them: the local branch of CAMRA's shortlist for pub of the year runs to the following:

So we decided to turn over the new leaf a couple of days early, and headed off in the rain to The Queens Head at Fyfield. Not in the CAMRA list, but a Good Pub Guide main entry. And deservedly so. When we first tried to go here, we just turned up at the bar only to be told that all the tables for Sunday lunch had been booked up several days in advance. Other than the fact that this is quite a small, cosy place, I'm pleased to report that this popularity is because it has great beers, wine, food, atmosphere and location - there's even a picturesque garden with a river running past the end of it. All in all, the real country pub deal, just 15 minutes along the A414 from Chelmsford.

Little Baddow is one of those places I used to talk about on the mighty Chelmer FM without ever actually having been to, so it was eye-opening to drive through on our way to the next pub. This place smells of money - click on the link to see - and picking up the Danbury, Bicknacre and Baddow Journal (sadly not yet online) with its note that Danbury Church tea towels make ideal Christmas gifts, confirmed my impressions. TCMJ commented that even the bungalows here were big enough to be better described as "ranches". North Hill here leads down from Danbury into L'il Baddow and the river, where you can get cream teas and boat trips.

Down here is the excellently named "Rodney" - every table has a menu with a little potted history on it, so I can tell you that the house dates from 1650, and it was owned by the Hodges family in the 18th century, who also founded the Chelmsford Brewery, so it would have sold their beer. What it doesn't say is how it got the name, other than a reference to "it took over the sign of the Rodney from the old Rodney further up the hill as that ceased to be the social centre of the village".

At 6.30pm between Xmas and New Year, it was dead. Perfectly nice, just no-one in there, in amongst the usual horse brasses and ships memorabilia (?!). We had some nice beer, and a packet of popadoms that even came with a portion of chutney inside them. What will they think of next? Then a group of six came in claiming to have a food booking that the pub didn't know anything about. There was plenty of space for them, but listening to their conversation, we learned why they were hungry - as one of them had only had three banana sandwiches since breakfast. This sounded like a local radio phone-in topic: "tell us what you've had to eat since breakfast..." There's at least an hour in that, including ten minutes each from a nutrition expert from the University of Surrey and a vegetarian cafe owner in Brighton. So The Rodney: nice enough, just a bit quiet. I think however that if you lived close-by and were in here on a Friday night, it'd be a good little local. We may be back to check.

One of the shocks of what we are already calling last year was arriving at the Garderque to be presented with Sainsbury's Basics Lager (2% ABV). Ian claimed he "liked the taste" and wasn't just being tight (it's 22p/can, value fans...)

So, when he arrived last night clutching a can of this, we decided that in true Harry Hill style, there was only one way to settle this: a FIGHT! The can of Carling C2 that I was given at Liverpool Street by a goody girl at 8am one morning "great tasting, mid strength", versus Sainburys Basics: "light, refreshing, thirst rate!"... 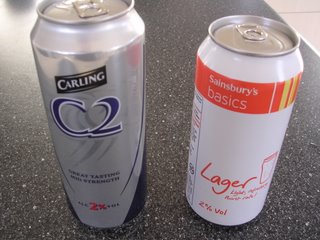 and a bottle of real lager, represented for this bout by Grolsch of Holland. 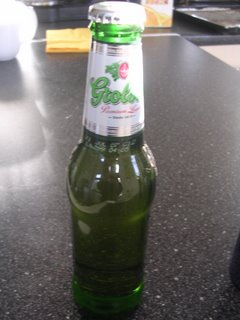 Ian and Shelley would pour into random glasses, while Al, Louise and I would taste test. 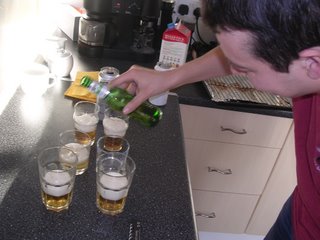 Interestingly, after appropriate amounts of sniffing and swooshing round the palate, we judges all agreed on which we believed to be which. But we only got one out of three right! All I can say is thank goodness that the one we did manage to correctly identify was the 5% Grolsch! And to maintain Ian's last remaining shred of dignity, we did actually prefer the Sainsbury's to the C2. 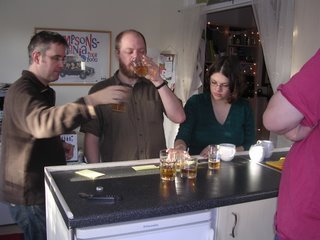 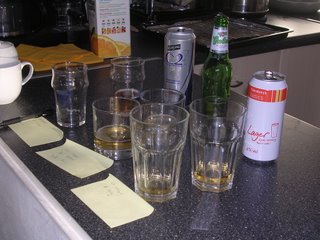 So already this year, I'm pleased to say we've proved that Ian is tight, and proper beer is better. It's shaping up to be a good year... Happy 2007! 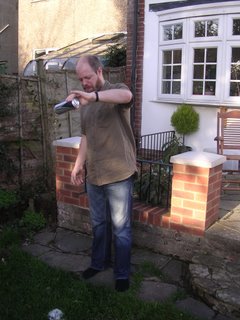 The losing C2 "lager" is ceremonially fed to Chelmsford's worms...
Posted by Will at 3:02 pm No comments: