First, an apology. I woossed out of the Walton Pub Crawl because I had ManFlu (probably better than having BirdFlu at present). Actually, I think it was real flu, not just ManFlu - I did have a temperature and all the other symptoms, and TCMJ - who had to wait on me for several days as a result will testify to my snivelling, whimpering state.

Any other weekend I'd have been happy to spend the time in bed. But this one meant I missed not just the Crawl, but also the Chelmsford Winter Beer Festival. I hope they choked on all that lovely beer just yards from where I lay alternately sweating and shivering ... But am also genuinely sorry to have missed The Crawl.

My continued absence from work today (I'm nearly on the mend, thank you for asking) also meant my collegues kindly drew my attention to this news story: Employers braced for National Sickie Day which I consider to be "unhelpful" at best!

Anyway, time to report a new and spectacular find. What I love about London is that I've been there or nearby all my life, much of which has been dedicated to the pursuit of fine pubs, and yet an evening out with The Anorak Stacey Harris can still turn up a fine new place that I had no idea existed. This one is doubly galling as I walk past the door most days on the route between Liverpool Street and Regulator Towers. It's just off Old Broad Street, in Throgmorten Street (no 27a), and is called, er, Throgmorten's. 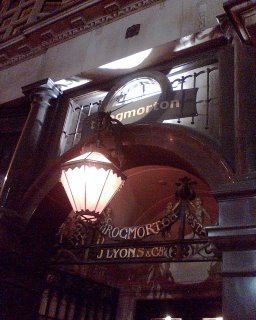 As with all good finds, there's an understated entrance - with a sheet of A4 stuck on the door saying "come in for a drink". There's a rickety looking lift of the type that old hotels have, with a gold tiled staircase curled round it, taking you down to the lower level and the main lounge bar. 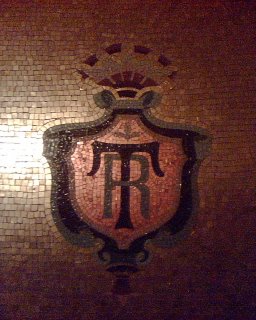 This is a proper old bar - the last time I experienced anything like this was staying on The Queen Mary in Long Beach - a gold mosaic bar, chesterfield sofas, art deco lighting. I've read that this used to be the flagship of the J.Lyons empire, - the review also correctly noted that it now feels slightly bohemian, as some of the glamour is slightly faded, but its still an incredible piece of architecture. There are two other bars - the Long Room, which is jaw droppingly impressive - it wasn't serving, but you could go in there to view. There is another bar - The Oak Room - one level down, which I'm told is a Sports Bar, but that was firmly closed (I don't know if this is permanent, or just on the day I was there). 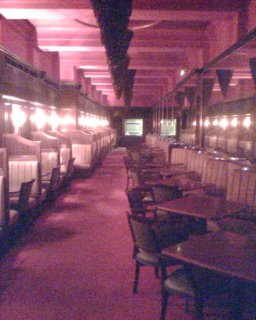 You'd think a place like this would be all cocktails, but not at all: both beers and lagers (I had Landlord, and I think there was Adnams Broadside too) on draft at sensible pub prices, served in glass tankards with a handle! I was there at just before six on a Wednesday and easily got a table. 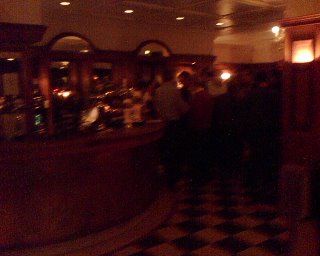 It got busier later on, but what I can't understand is why this place isn't a huge tourist draw, on every single pub list and packed out? Am I missing something? Or perhaps like me, once you've been here, you don't want to tell anyone about it, in case it gets ruined... Sshh.
Posted by Will at 8:41 pm 1 comment: