One of my first gigs in radio was the privilege of producing the breakfast show on Mercury FM, first with Jon Scragg and then with Steve Hyland. One of the best pieces of advice I was ever given was to always keep a notepad with you, as you never know when inspiration for "a bit" for the next morning's show will strike.

Housemates would despair of finding papers with corners or whole pages torn out and stuffed in my pocket for the next day's show. I learned to pick up and read ANY magazine lying around on trains or in waiting rooms - the more obscure the better. My friends know that I still carry my Metropole Hotel waiter's pad from my days as a barman in Brighton and scribble stuff down. 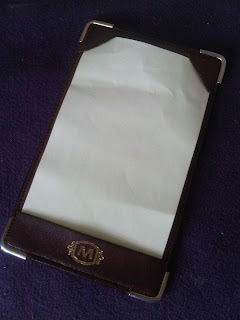 Old habits die hard, but there are obviously better ways of doing this nowadays - I spend far too long reading Twitter and emailing myself intriguing tweets to read and consider later, and the brilliant Evernote app will let you collect notes in pretty much any form, including searchable photos of text. In short, if you're in radio, the chances are you're probably an ideas and content sponge (and if you're not - you should be!).

When starting at GTN, my colleague Paul Hutton told me about Roy Williams, the Wizard of Ads, and his emailed "Monday Morning Memo". This is described on its website as "a weekly contemplation prepared by New York Times and Wall Street Journal bestselling business author, Roy H. Williams. Whether the memo contains business advice or a philosophical muse, it’s guaranteed to be something you’ve never heard before. The Wizard of Ads has a strict policy: No Rehashed Pablum." I read the email every week. Sometime I get what he's on about, sometimes I really don't - but it's never a dull read. This week, he asked for his readers to mail in with the one email mailout (other than his own) that they always make the time to read.

The resulting emailed suggestions are a very long read - but I'll helpfully summarise for you. The one that came up time and time again was the blog and email newsletter from Seth Godin, who wears the most "meejah" yellow glasses I've seen in some time.

But one email stood out for me. It wasn't just another self-help, inspirational email newsletter, it was an actual practical idea, that takes the "magpie content sponge" idea one step further. I think it's brilliant, and I'll be doing it from now on. Credit to Kevin, and the Wizard of Ads - but also remember, it's only because of being a long-standing content sponge, and going through the emails to see if there was anything interesting and useful, that I found it in the first place...

My link: 'Do not deliver before:'

A few times each week, I come across an insightful piece of knowledge or experience that moves me. It might be a famous quote that inspires, an image I shouldn't forget, or a mistake I've made that doesn't deserve repeating. I often use these powerful tidbits of life until the next one comes along, and the former is forgotten. That's why a couple years ago I began to email myself this knowledge on the time-delay of 365 days. It's amazing how often I wind end up giving myself encouragement, advice, and reminders at the very moment I need them.

I open the email every single time because I know the author personally, and he knows exactly what I need to hear.

Footnote: Serendipity - There was a knock at the door just now, and it was ACTUAL Jehovah's Witnesses. I didn't think that happened in real life! They handed over copies of The Watchtower. I'll read them - because you really don't know where you'll find that next bit.