Blogs and tweets about last Thursday's nextrad.io conference were requested - I felt I should oblige...

The £99 ticket price was a great start. I'd be hard pushed to attend the Radio Festival this year, even with their generous concessionary rates - a couple of rounds of drinks in the Holiday Inn Media City would be more than this alone. But while I know Matt and James aren't making much on the tickets - at least that's what they told me to avoid buying a round in the Bree Louise afterwards - this meant that attendance was within the reach of those without expense accounts, and so brought along a younger audience, with more "do-ers" than yer standard conference of suits.

The strictly-enforced 9 or 18 minute sessions meant that the day cracked along at a pace, and there was no chance of a snooze for any of the audience who'd set off at dawn to be there for 9am. Several sessions actually finished slightly short; I think Moz Dee won the prize for talking closest to the exact allotted time, and no-one required the shepherd's crook under my chair to be deployed for their removal from the stage. Like a hit-music format station, if you didn't like one of the wide-ranging topics, there was another one along in moments. 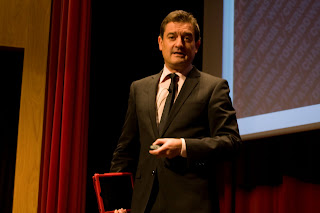 One of the most pleasing aspects of the format was the lack of panel sessions. I've chaired a few of these in my time, and always found them difficult to bring alive, particularly if you have to have every question answered by each panellist in turn. It takes some bravery to move away from the old-school format, and on this occasion, it paid off well with none of the sessions outstaying their welcome.

Of the sessions themselves, The Guardian's Francesca Panetta produced an understated but compelling plea for on-demand audio and podcasts to take the opportunity to create something beautifully crafted and treasurable. Some considered that's what ALL radio/audio should aspire to, but occasionally we all need to be reminded of that. Peter Gabriel-lookalike Dick Stone was entertaining as always, reminding us to internalise, and avoid reading out words written to be read on the page, not spoken aloud. And host Matt Deegan gave us words, including "shhh" - avoiding public industry infighting; and "hire" - setting out that the requirements and competition to find and retain the best people for your station will be different for an IT person, than for a journalist. 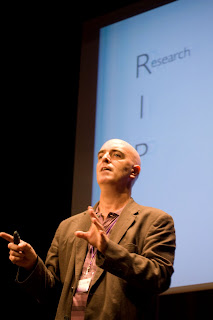 I found it an intense day - perhaps I just can't think that fast! It felt like several Max Headroom-style "blipverts" had been downloaded into my brain. (Kidz: it's an 80's reference, check it here.) The Magic Circle was a great venue, but somewhat under-exploited - and a magic trick or two, coupled with a little more interaction with the audience, could have offered a some light and shade to the day.

These are minor quibbles. One sponsor I spoke to told me they simply wanted to be associated with "intelligent discussion about radio", and on what I saw, they got their money's worth several times over. The Radio Festival has excelled itself with a very high-quality line-up of speakers this year, but Next has raised the bar for radio conferences, and demonstrated that there can be a different way of doing things. It'd be welcome as a regular fixture in the industry calendar, and perhaps not just in London.

More photos of the conference are here.
Posted by Will at 4:28 pm