My colleague Paul Hutton has written a very balanced and eloquent blog post entitled "Goodbye Traffic Radio". I'd prefer "au revoir". As Paul has noted, Trafficlink has already jumped in with its own station, and is certainly following his advice to shout about it! We'll also have to wait to see whether any new Highways Agency-licensed Traffic Radio service gets off the ground.

Similar developments are taking place elsewhere. In Montreal, this week sees the launch of Radio Circulation 730, a French-language traffic station now unexpectedly replacing CKAC sports, and a sister English-language station is likely to follow shortly. It follows AM730 Vancouver, which I visited last year - where you'll find three dedicated staff at any time, taking turns to be live on air for 20 minutes and then producing/information gathering for the remainder of the hour. We'd have loved that level of staffing at Traffic Radio. 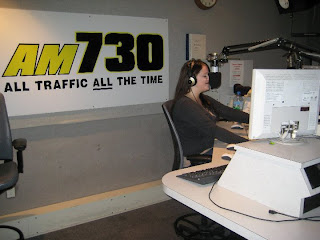 However, those that argue about whether a traffic station should play music and be more entertaining (and we may return to that one at a later date), or be analogue or DAB - I'm looking at you, DigitalSpy - miss the point. As with any content, it's about making the required information available on whichever platform or format is easiest for the user at that particular time. At breakfast, yes, that might be the local radio station that they're listening to already. In the car, if they have a satnav, it could be through the traffic included in that package, or indeed from an a rolling-travel news radio station accessed via a popular iPhone app* such as the Highways Agency's.

I believe a really significant change in travel news has taken place in the last year, which hasn't yet been fully appreciated. It used to take rooms full of researchers to gather the data by phoning up Little Chefs and bored coppers, whereas now accurate and as-live flow data is freely available from multiple sources, whether government: Highways Agency/Traffic Scotland/Traffic Wales/Transport for London, or private: TomTom/Googlemaps/Trafficmaster/Inrix (who own Trafficlink). Each will obviously say their specific sources and algorhythmic magic is better, but my experience suggests they're all pretty similar. (TomTom has a slight edge for covering ALL roads, not just trunk routes - which could be useful if you're a smaller, rural station - and Inrix has a good app for BlackBerry users like me.)

So - if all that data is now out there, then the competition moves to become what you do with it. And here's where the steering wheel turns full-circle, as for radio once again, it comes back to making it sound great, and easy to access across multiple platforms. That means high-quality, trusted travel presenters, ideally with experience and tons of local knowledge. Being the station in your market that "owns" travel news, through sub-brands such as "Travel you can Trust" or "Traffic on the Ones" and delivering on that promise. And bringing it to platforms such as Twitter with a unique house style - for a great example, check @bbctravelalerts.

The announcements last week from TomTom (video below), and Ford, who'll be demonstrating a social networking concept car at the Frankfurt Motor Show, show the direction of travel, and the in-car competition. That's before crowd-sourced traffic apps, such as Waze. In all of this, we radio types also need to make sure we know where we're heading, otherwise we'll all just be listening to automated satnav voices us telling to take the next exit and leave the motorway. There's a lot for those new stations to consider...

(*Do not use your mobile phone while driving. Sorry, just can't get out of the habit of adding that!)
Posted by Will at 12:19 pm